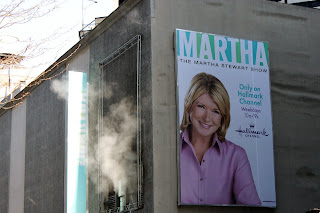 Is no secret that Martha Stewart is nothing short of a goddess to all us crafters. We have followed her ideas and designs and have been inspired by her.  A few weeks ago I had the opportunity to attend the Martha Stewart show! Not only did I attend the Martha taping but it was also the Craft Hour Show … Score! My fellow crafting divas and I really did not know what to expect. In order to get to this moment, we had attempted for over a year to be selected to attend one of the show’s tapings. You may not know this, dear friend, BUT the Martha Stewart show hand selects the participants and tailors the attendees to the show they will be taping. I was the perfect fit. We had carefully thought out every detail of our application, having been selected once last year but not being able to attend. Sadly, I was chosen to attend exactly one week after having returned from a trip to NYC! My friend Julie and I were determined to get in.   It was her eloquent application that finally brought this dream to fruition! Once we were notified that we were invited to attend a taping, we had to fill yet another questionnaire. We did so happily,   with our bios on why we love to craft and what our craft of choice is at the moment. So we booked our flights and hotel rooms, poured over what we would wear just in case we had a second on- camera moment and we were off to the Big Apple!
Our first day in New York we did what any rational woman who is away from her husband and children for the first time in a long time… We ate and shopped!
The day of the show we woke up at 6 am to get ready. We needed to be at the Studio by 8am for the 10am taping. When we arrived there was a line of adoring Martha fans waiting to get in. 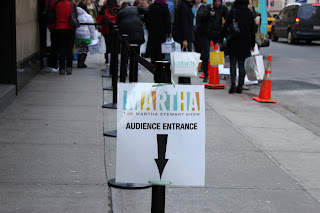 Once we got called in we could hardly contain our excitement! We went inside gave our names. We were given a ticket with a yellow line through it. We went through security and a metal detector; have to keep the Queen safe, you know. We sat in a waiting area, took some photos and then  Joey Kola himself, Martha’s humorous audience warm up artist, came in to pep up an already excited group of Martha Groupies. Once given our instructions, we were called back in groups by color.
We were of course the last color called. Darn it! After all the hair makeup, outfit planning we were going to be in the nose bleeds seats! Well, the four of us walked in and much to our surprised and ecstatic delight, my friend Julie and I were chosen to sit in the very front row! When I say chosen I am not kidding. They even color coordinate the audience. The camera was right in front of us. (Is that my good side?) We sat down took a few pictures and waited for the show to start.
The studio was beautifully decorated in spring colored tissue paper poms, click here for how to instructions on how to make them. In the spotlight stood a beautiful Martha Stewart Crafting Hutch which she was debuting as part of her Home Decorators collection. We all were absolutely drooling over that fine piece of furniture. You could see all the crafter’s minds doing measurements in their heads trying to figure out where in their house they could make room for that beauty, myself  included.
When Martha came out we all clapped, on cue of course, she introduced her guest crafters. Since we were seated at the front row the camera came panning to us and we were compelled to have a smile plastered on our faces at all times. We were so happy to be there that it was not hard to do. After that the deluge of crafting supplies to be gifted to the audience began. Yay! More smiling! In the first segment we all received,The Martha Stewart Encyclopedia of Crafts.  The necklace making segment we received an assortment of wire lace from A La Carte Clasps.  Next segment we hit the jackpot!  Martha asked each of her guest crafter what their top crafting tools were. They were the Xyron Creative Station , Gingher dress maker shears, the Zenith plier stapler, the Beadsmith 5 piece plier set,  Martha Stewart Crafts, cutting mat, paper trimmer, scoring board, and bone folder and lastly Magic Cabin Wool Felt. We received all those as well. We could not have been giddier.
When the actual show tapping ended, we were told that Martha would be answering a few audience members’ questions to be taped and featured on the Martha Stewart website. Joey comes out with his microphone. Of course my hand went straight up! Yes, he picked me and I got to ask Martha my question. Anyone who knows me will not be surprised to know that I already had a question prepared that I had gone over in my head a dozen times prior to arriving to the show, just in case.  Excuse my giddy dorkiness, but I was asking MARTHA STEWART!  a question and I couldn’t help myself.  Click here to see the video of me asking my question.

. I am wearing my gorgeous Blush Envy ring!

Somehow I asked my question, about Martha Stewart glitter technique, sat down and don’t remember what the answer was. Frankly I did not care I was having an out of body experience at the moment. It was surreal
After that, Martha taped some promos for upcoming shows and we really did not have the opportunity to take any pictures of her. Believe me I tried.         (INSERT “CRAPPY MARTHA PHOTOS” HERE) 🙂
We were escorted back into the holding area where we were greeted by a sea of Martha Stewart bags rimming with all of the crafting goodies your heart could desire.
Exciting then, not so exciting later trying to go through security with a laminating machine in your hand!
Needless to say it was a once in a lifetime experience for us and we enjoyed every tissue pom making, glue gun toting, glitter sparkling second of it. And by the way, NOBODY got the crafting hutch…There’s always next time… 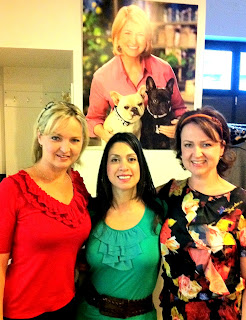 17 thoughts on “Martha Stewart Show, The Craft Hour and Giveaway”